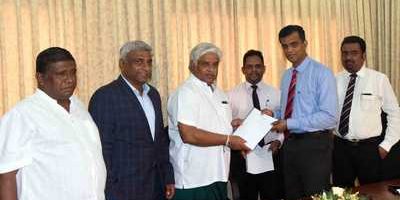 Jaya Container terminals limited of Sri Lanka Ports Authority [JCT Oil Bank] has enhanced its profit in the previous year by 113 percent in relation to the year 2015, Hon. Minister of Ports and Shipping Arjuna Ranatunga said. Minister Ranatunga expressed these conserns while speaking in a ceremony held today, [20] in the Jaya Container Terminals Limited. This ceremony was held to welcome the Sinhala and Tamil New Year and to declare accounting records of the institution.

The primary business of the Jaya Container Terminal limited is the storing of fuel which supplies for vessels and to supply fuel needed by the companies which provide fuel for vessels in the sea. This company comprise of 13 fuel tanks that could store, HF O 380, HFO 180 and MGO fuel categories. Total capacity of these tanks is 35000 MT. This company had earned a profit of 36 million rupees in 2015. It had earned a profit of rupees 77 million in 2016. It had reduced selling cost from 96 million to 92 million and administrating cost from 64 million to 55 million. Preparation of effective management plans by giving the priority to protect the institution has paved way to these accomplishments, Minister Arjuna Ranatunga added.

Chairman of the Sri Lanka Ports Authority Mr. Dammika Ranatunga who addressed this ceremony said that management has able to manage the expenditure of the institutions and has able to introduce new financial plans. Mr. Dammika Ranatunga is the chairman of the Jaya Container Terminal Limited. When our new director board was appointed in 2015 we were able to introduce various management methods. Especially the method of making the budget, Mr. Dammika Ranatunga added. There by we planned to recognize and managed the ways of expenditure and to develop the ways of income. Through this procedure any institutions could be developed. We could create plans. But implementing these plans is a responsibility of you. There by we expect that you will contribute to make this institution successful as you did in the last year………” Chairman of SLPA Mr. Dammika Ranatunga added. Managing Director of the Jaya Container Terminal Limited Mr. Sisira Perera, members of the Director Board Mr. Mangala P. Gunasekara and D.V. Wimalasiri, employees of the Jaya Container Terminals Limited, [JCT Oil Bank] and several other distinguished guests participated to this event. Business plan of the Shipping Oil laboratory to be constructed was hand over to Minister Arjuna Ranatunga at this occasion.
(Maritime in SriLanka – 20042017)