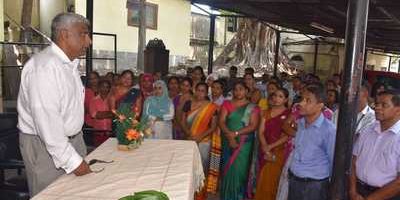 Hon.Minister of Port and Shipping and Chairman of SLPA visit employees with greetings for the New Year

The first meeting on the first day of work following the dawn of Sinhala and Tamil New Year at Sri Lanka Ports Authority (SLPA) was held with the initiative of Hon. Minister of Port and Shipping Arjuna Ranatunge and the Chairman of Sri Lanka Ports Authority (SLPA) Mr.Dammika Ranatunge at the Board Room of the institution on 17th April 2017. Members of the Board of Directors, Directors of SLPA and Heads of Divisions attended the meeting. The discussions at the meeting included the progress of the first quarter of the year compared to the same period last year. Following the New Management’s implementation of work procedures on 15th October 2017, the institution gained a profit of 83% after tax marking a profit of Rs.11 billion.

During 2016, infrastructure of the Port of Colombo and all ports around the island under SLPA was subjected to a special development scheme. Hence, the financial discipline established at the institution by the new management has become productive in all sectors. The implementation of the Annual Acton Plan and the Zero Base Budget procedures have effectively controlled and managed expenditure and purchasing requirements in every Division.

The well planned operational procedures at the institution have rapidly reduced and minimized idle time and increased efficiency towards better productivity. As a result all stake holders and port users have expressed their gratitude and commendations for speedy navigational, operational, TEU and other cargo services implemented at Sri Lanka Ports Authority (SLPA).

The Information Systems Division (ISD) that has taken a special initiative in such implementations has forwarded around 12 proposals of which the establishment of a Warehouse Management System has been the first in line. The objective of this new system is to introduce a speedier warehouse management system by SLPA than any other such system in Sri Lanka.

Expressing views on such procedures, Chairman of Sri Lanka Ports Authority (SLPA) Mr.Dammika Ranatunge stated that no influence has been made by Hon.Minister or the Hon. Deputy Minister for any recruitment at SLPA. “ Such implementations therefore, have immensely contributed towards recruiting the most suitable persons as employees,” the Chairman stated.

The Chairman also said that the committees implemented at present at the institution are pleasantly performing to enhance transparency in all initiations pertaining to promotions of the employees, transfers, SLPA housing matters for employees, salary hikes and bonus and incentive allowances of the employees deviating from the procedures which were under a trade union mafia in the past.

He further stated that the contribution extended by Hon.Deputy Minister of Port and Shipping Nishantha Muthuhettigama is highly commendable in all port related activities and especially during difficult hours of maneuver.

All Divisions of the institution at present are extending their highest possible contribution to boost productivity at SLPA aiming towards a greater objective of contributing to sustainable operations of the Sri Lankan Port sector to the future generation.

Following these discussions the Chairman of Sri Lanka Ports Authority (SLPA) Mr.Dammika Ranatunge visited the employees of the institution at their respective Divisions to convey his greetings for the Sinhala and Tamil New Year. During the visits the Chairman stressed that all should work together towards enhancing efficiency to boost productivity at the institution to secure the port for future. He stated that for the first time in the port history, with no employee request, a direct decision was taken by Hon.Minister, Hon. Deputy Minister, the Board of Directors and him to boost bonus allowances for all employees through profit gained at the port without surrendering to any influential force and fulfilling a promise to the employees last year.

He further stressed that any attempt of privatization of Sri Lanka Ports Authority (SLPA) could be stopped through proper and effective planning and performing by all port employees to elevate productivity better than the private sector to extend the best port services to all customers and port users.
(SLPA – 17042017)